Tarek holds two degrees – a Starred First Class Degree in Music from York University, and a further First Class Degree in Actor-Musicianship from his training at Rose Bruford College. Since graduating in 2008, he has been working widely across the UK, Europe and North America as a much sought-after Musical Director, Composer, Arranger, and performing Actor-Musician. He holds a DipABRSM on piano, and is also an accomplished accordionist, flautist, and violinist . Tarek was recently appointed an Associate Artist of the Watermill Theatre, Newbury. 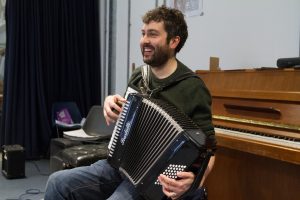 Tarek has worked in these various capacities with such prestigious companies as The Royal Shakespeare Company, The National Theatre, Bristol Old Vic, Manchester Royal Exchange, BBC Radio 4, Northern Stage, Birmingham Rep, The Orange Tree Theatre, The Edinburgh Lyceum, The Liverpool Everyman & Playhouse and in London’s West End, where he made his professional debut as Show MD of the multi-Olivier Award nominated production of Sunset Boulevard, and recently returned to MD the RSC West End transfer of Don Quixote starring David Threlfall & Rufus Hound.

Tarek has recently embarked on a number of major collaborations with some of the UK’s most prestigious theatre companies; Tarek was the MD for the RSC tour of A Midsummer Night’s Dream: A Play for the Nation in 2016, which was accompanied by the BBC Documentary series The Best Bottoms In The Land. He also MD’d the National Theatre’s spectacular inaugural Public Acts production of Pericles, which received wide-spread acclaim for its scope and ambition, combining a cast of nearly 200 community performers with professional actors and musicians and culminating in an unforgettable run of performances on the NT’s Olivier stage. Tarek has since returned to the RSC to MD their acclaimed productions of restoration comedy The Fantastic Follies of Mrs Rich, and the brand new musical Miss Littlewood, which ran in the Swan Theatre throughout 2018.

Tarek returned to Bristol Old Vic to MD the World Premier of their much anticipated new musical, The Grinning Man, prior to its West End transfer.  This built on his relationship with Bristol having earlier arranged and MD’d their revival of Swallows and Amazons over Christmas 2014. 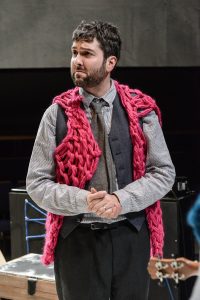 As composer, Tarek has created a range of new scores for theatre productions, including Christmas shows for the Watermill Theatre, Orange Tree Theatre, and Edinburgh Lyceum, various commissions for BYMT (formerly YMTUK) as well as composing the songs for Marcy Kahan’s BBC 4 radio play Big In Samoa.

He has worked twice more for Revel-Horwood and Musical Supervisor Sarah Travis – as Assistant MD on Chess the Musical, including its 6-week residency at Toronto’s Princess of Wales Theatre, and then as Show MD on the UK No 1 Tour of Fiddler on the Roof, starring Paul Michael Glaser. In 2014, Tarek arranged and MD’d the first regional revival of Howard Goodall’s musical Love Story at Bolton Octagon, completed the commission of a new score for Youth Music Theatre UK and received an Arts Council International Funding Award to carry out musical research in Georgia and Azerbaijan. 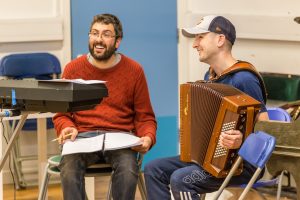 Tarek is also a regular contributor to the work of the top UK Drama Schools, having coached, taught or MD’d for RADA, Guildhall, Mountview, Oxford School of Drama, GSA, and East 15. For the past 6 years, he has been Musical Supervisor for the 3rd Year Rose Bruford Actor Musician’s musical production. In other moments, he is a performer and composer for Arts in Healthcare environments, including for charity Music In Hospitals and for St George’s Hospital, Tooting.